Tahiti is not only a beautiful and exotic locale; it’s also a unique natural wonder. The destination itself covers over 1.5 million square miles of the South Pacific, but incredibly enough, its total landmass is only slightly larger than the small state of Rhode Island. This means that Tahiti is mostly made of water! Still, the country consists of 118 islands and atolls spread out over five island groups (archipelagos). But what exactly is an atoll and how is it really different from an island?

An atoll is a formation of small, coral islets (or “motu”) that encircle a lagoon, either partially or completely, making it round, oval or even sometimes horseshoe in shape. From above, it looks like a string of sandy beaches with a shallow body of water in the middle. The small islets are separated from each other by channels that lead from the ocean into the lagoon.

Atolls should not be confused with islands because their geographic structure is significantly different. Since their formation relies on the building of coral reefs, atolls can only be found in warm, tropical waters such as the South Pacific and the Indian Ocean. Their unique formation also creates the ideal habitat for hundreds of coral species and a host of other precious marine life. Their lagoons are protected by the coral reef, creating some of the world’s most vibrant, natural aquariums.

Formed over 30 million years ago, atolls were once a mysterious land formation. However, in 1842, Charles Darwin provided an explanation for their shape. Since then, his theory has received empirical support and is therefore still widely accepted today.

Darwin concluded that these unique land creations started out as an oceanic volcano. He believed that atolls were the result of two natural phenomena occurring simultaneously – the continuous growth of a coral reef and the gradual sinking of an oceanic island.

Over time, as an oceanic volcano starts to cool and become denser, it gradually sinks below the ocean’s surface. The island’s surrounding coral, which needs light to survive, continues to grow upward and gradually separates from the subsiding island, forming a barrier reef. Eventually, the volcano sinks far beneath the surface, leaving behind a ring-shaped reef surrounding a central lagoon. Below is a diagram to give you a visual idea of what happens during this process.

The most commonly known atolls in Tahiti are the Tuamotu Atolls. These include Rangiroa, Tikehau, Manihi and Fakarava. Because of their unique coral formation, they provide some of the best snorkeling and diving in Tahiti. Ready to go? Here are just a few of our dive packages to Fakarava and Manihi.

Bora Bora could be considered a partial or “almost” atoll because its volcanic island is still visible in the middle. Below is an aerial shot of Bora Bora from outer space to give you a better idea. Pretty incredible, right? But don’t worry, the main island of Bora Bora isn’t sinking any time soon… just make sure to visit in the next few million years! 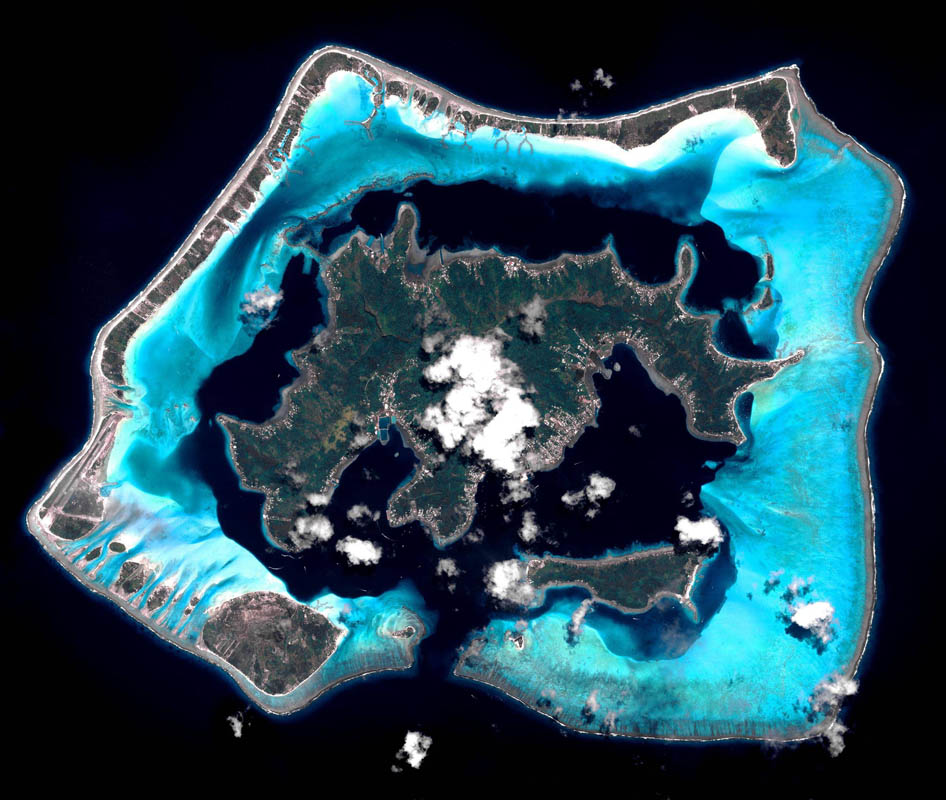 13 thoughts on “What’s an Atoll? Know Nothing At’all?”