Our clients, Barbara and Kevin Murphy, are avid travelers who love the South Pacific. They recently returned from Tahiti and they’ve shared with us a few photos and highlights from their trip. We sent them to Bora Bora, where they stayed at the InterContinental Bora Bora Resort & Thalasso Spa, and to Rangiroa, where they stayed at the newly renovated Hotel Kia Ora. This was their second trip to the islands and they traveled over Valentine’s Day. How romantic! As Barbara wrote to us, “What a great way to spend Valentine’s Day… flying to Tahiti!”

Here’s what they had to say about the InterContinental Bora Bora: “We landed in gorgeous Bora Bora and were greeted by a rep from the hotel and promptly driven over that amazing lagoon in the hotel’s boat shuttle. Check in wasn’t supposed to be until 2pm, but they had our room ready upon arrival around 10am (really nice after that long flight!). You were so right… the InterContinental Thalasso Bora Bora is an amazing property! The upgrade to the Diamond Overwater was worth every penny! We looked directly at Mt. Otemanu and I can’t say enough about how beautiful and large those bungalows are! Wow!” 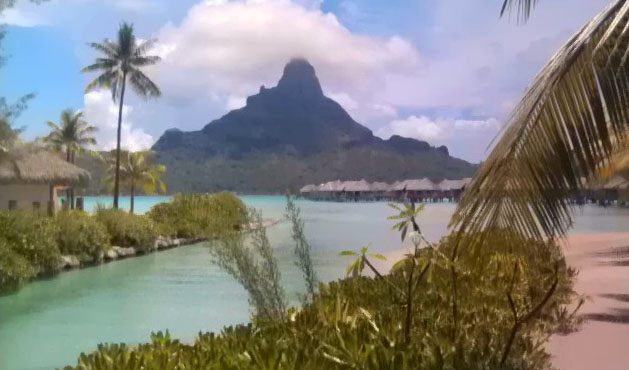 The food: “The breakfast buffet had everything imaginable… fresh fruit, cereals, omelets made to order, fresh breads… I could go on and on. And the dinners! Such amazing presentation on the plate! We had fresh fish every night!”

The activities and culture: “We went on the jeep 4 x 4 tour, jet ski circle island tour, and also hired a private boat to snorkel at the coral gardens, visit the mantas and snorkel with the reef sharks – all with fun and knowledgeable staff. We learned lots of Tahitian and practiced every day with the staff and also learned so much about Tahitian history and culture just in speaking with the islanders every day. I think they liked us being so interested in the culture and learning words because I was given a string of 8 black pearls when I left from one of the staff members. What a surprise! Kevin got a tattoo last time on Bora Bora, so we went with another couple we met to watch them get tattooe’d by the same guy that did Kevin’s. I guess he is the most famous person doing them on Bora Bora since he even appears on a video at the activities desk! Lucky us!”

Here’s what they had to say about the Hotel Kia Ora: “So beautiful! That hotel is also amazing and such a different experience than Bora Bora. So calming, laid back and slow paced. The overwater bungalow there was perfect… At night we’d sit on our deck and count the stars while drinking some wine. So beautiful and so many stars since there are so few lights to interfere with the view of the nighttime skyline.”

The food: “Breakfast buffet again was equally good with same fresh fruits, cereals and made to order omelets. [For] dinner… it was actually hard to decide which fish to order each night! They even had quite an extensive list of beef and other options. I was told the menu had just changed the week before we arrived and [we] very much enjoyed the staff’s recommendations.”

The activities: “We went on 4 dives, rented bikes for a day to explore, and also rented a private boat (not from the hotel) to explore the lagoon and snorkel out on the atoll in various locations. The dives were some of the best I’ve ever been on anywhere in the world. Literally thousands of fish (not hundreds), but truly thousands! We were down about 40 feet on one dive at the pass, and a group of dolphins came swimming up to us and let us pet and play with them. Amazing since they weren’t tame or captive dolphins!”

“Amazing trip! Thank you so much for all your extensive help, ideas, suggestions and answers to all my questions. Candice… you are the best and we will always recommend you to everyone we know! So much appreciated!” – Barbara Risner Murphy and Kevin Murphy

Thanks Barbara and Kevin! We are so happy to hear you had an amazing time.

Here’s one last picture from their trip. Barbara told us, “We’re framing this photo for our wall! We posted it on our Facebook page while we were there and received lots of flack from our friends saying they could tell what a horrible time we were having!” Just like Barbara and Kevin, you’ll find a trip to Tahiti always gives you bragging rights!

19 thoughts on “Much Love for Bora Bora & Rangiroa!”