Happy New Year to our friends and followers! This time of year is all about creating resolutions and achieving your personal goals. If those happen to include running a marathon and visiting the islands of Tahiti, guess what… you can achieve both at the same time! The 25th annual International Moorea Marathon is scheduled to take place on Saturday, February 16th, and it’s a great way to enjoy the beautiful island of Moorea while starting off 2013 on the right foot! 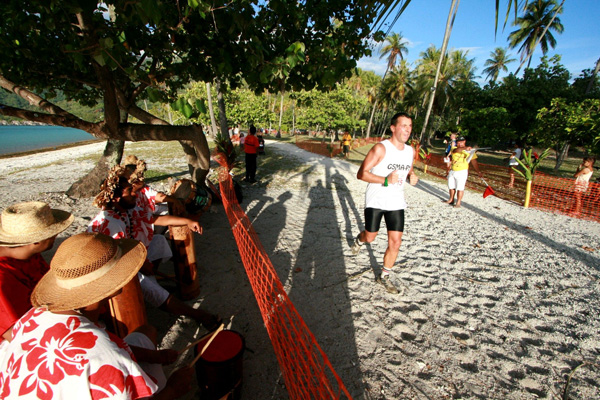 The marathon in Moorea is considered to be one of the finest in the world. Since it takes place every year around Valentine’s Day, it has been nicknamed Tahiti’s “Love Marathon” — and with a relaxed vibe and breathtaking scenery, what’s not to love?

The race starts near Temae Beach on the northeastern side of Moorea and runs along Cook’s Bay and Opunohu Bay. Tahitian dancers and musicians perform throughout the course, while water stations offer fresh pineapples, papayas, mangos and coconuts to help invigorate participants during their run.

The event attracts people from Tahiti and all over the world. There are races of varying lengths to suit all entrants, including a full marathon, half marathon, 5K and a family run. The full and half marathons start at 4:30 a.m. and 5:00 a.m. respectively, while the 5K and family runs start at 9:00 a.m. Last year, over 800 athletes registered for the event.

The first official Moorea Marathon was organized in 1988, but it was in the works long before that. In 1971, as a result of the South Pacific Games, the island of Tahiti decided to organize its very first marathon. This was followed by a second edition in 1972 on the island of Moorea, then a third edition five years later in 1977.

The marathon started as a local event, but due to its great success, organizers decided to open it up to international athletes. In 1981, Tahiti hosted its first international edition with a course between Papara and Pater Stadium. After that, the marathon took place regularly on the main island of Tahiti until 1985.

In 1988, looking to reinvent the course, they moved the marathon to the island of Moorea where it has remained ever since. 25 years later, it has become a classic among the many other events that punctuate French Polynesian sporting life.

The International Moorea Marathon is organized by the Te Moorea Club in partnership with the Moorea Youth and Sports Ministry and many other sponsoring organizations. For more information about the event, check out the official website or watch the following video: